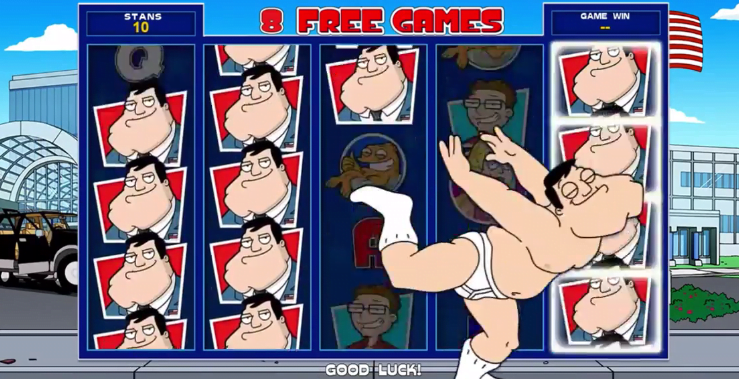 I know most of you have probably watched the TV Show American Dad…. Well, Playtech has just relased an American Dad-themed slot! Brief synopsis here: Stan Smith is the CIA dad. His wife Francine is…. Slightly ditzy but warm-hearted. Hayley (the liberal daughter), the teenage son Steve who…. Doesn’t have a prominent role. And we can’t forget about Klaus and Roger. Klaus is the goldfish and Klaus (my personal favorite) is an escaped alien from Area 51. Stan allegedly keeps Stan in his home because his employer’s owe Roger some kind of debt.

Ok enough about the actual TV sitcom and more about the newly released slot! This 5-reel and 40 fixed payline slot is interesting at the very least. Roger the alien is American Dad’s Wild and when you land on 3 or more of him, he may just give you up to 10 random wilds OR even trigger the “Wheels and the Legman Feature”. When you trigger this, the characters all chase each other across the screen and by default, leave a massive amount of wilds behind!

Something else to keep your eyes peeled for… the “Schmooblydong Bonus Wheel”. That’s right, you read that correctly. Now I could have chosen not to mention this wheel but I couldn’t resist the urge to share it with you guys for a laugh. Despite it’s odd name, this wheel will show up on reels 1, 3 and 5 and will give you a 5 Free Spins Feature based on every character.